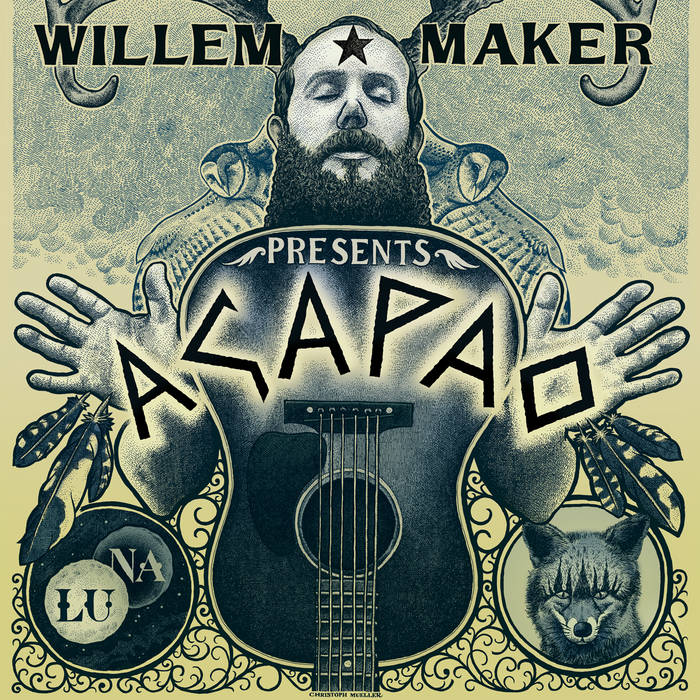 In the hills of East Alabama, Willem Maker spent more than a decade honing his songwriting skills in virtual secrecy, but in 2007, he finally released Stars Fell On, a rock record of a debut which was recorded and mixed entirely at his own Foxhole studio on Turkey Heaven Mountain. Originally released by Makerworks, the disc was reissued by Big Legal Mess (Fat Possum) in 2008, in anticipation of a new full-length for the label entitled New Moon Hand.
The sessions for this sophomore effort pushed Maker far from the idyllic comforts of his secluded home studio, with adventurous collaborations taking place in Nashville and Memphis, Tennessee. Along with four solo tracks from the infamous Foxhole, two were done with Mark Nevers at the Beech House, featuring members of Lambchop and Silver Jews, and six at Electraphonic Recording with co-producer Scott Bomar and a band that included Cedric Burnside, Jim Dickinson and Alvin Youngblood Hart. New Moon Hand was released in 2009, resulting in Maker's first extensive US tour and a kind New York Times nod in their yearly best-of lists.
For his third long-player, Agapao, which will initially appear as a lovely Makerworks limited edition CD, Willem played and recorded everything himself at the Foxhole, but don't expect a simple, solo, lo-fi folksinger effort. Besides being at times a heavily layered and orchestrated affair, this record rocks in its own weird way when in the mood to do so, and with mixing by Mark Nevers, mastering by Sarah Register and artwork by Christoph Mueller, the result is a beautiful, collectible disc of over an hour's worth of music, completing Maker's debut trilogy with what could be considered his most accomplished, optimistic and uplifting work to date!

A singer-songwriter from Ranburne, Ala., near the Georgia state line, Willem Maker worked alone to make “Agapao” (Makerworks), his third album, singing and playing all guitars, as well as bass, piano, drums. He got a brilliant illustrator, Christoph Mueller, to decorate its cover. He released it in April as a limited edition of 1,000, and you can download it from his site. Do it. He’s so ripe it’s ridiculous. Instead of ups and downs, ballads and rockers, “Agapao” is a weirdly intense party, 15 songs of sophisticated southern-rock trance music, composed with open-tuned guitar and boot heel, adjoining blues and country and heterophonic gospel music. It seems as if he’s making up episodic songs on the spot, tucking shouts and grunts into secret places, creating new riff sections that aren’t necessarily repeated.
- New York Times